Black Pearl Project - Get out of my house, Boat!!

Does anybody remember the song by the Shuffle Demons, "Get out of my house, roach"? Well. that's how I've been feeling lately about this project. Work on the boat slowed to a snail's crawl as I waited for paint to dry and while I finished off the loose ends, like the end caps.  Today, I decided that it was time to give'er the boot!!

For many (most) people removing the boat from the building area is simply a matter of flinging open a garage door or opening a basement window. But when you build an 18' 6" boat in an attic, removal tends to be much more of a production!! After supper I prepared the boat for it's send off, i.e., took it off the table, moved the table out of the way (which involved moving bits of drum kit), shifted a whack of crap and even had to remove a stud from the knee wall!!

With the aid of Cheryl and Paddy we managed to get it down the stairs - it JUST barely fit. If not, I would've had to cut a header off the stair well. I'm glad that it went well!!


And now for some mandatory "in the garden" shots!! 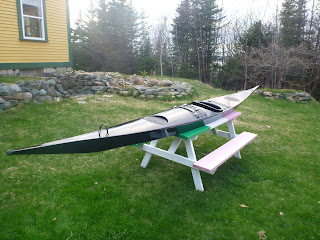 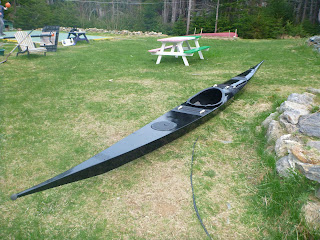 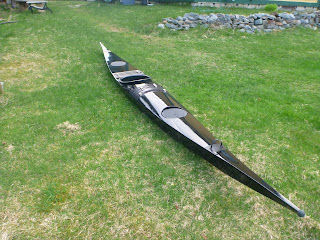 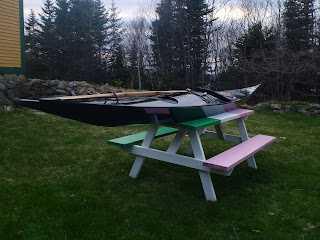 I was planning on doing a blog entry on the end caps but I got lazy!! Here's the condensed version. I decided to use squash balls as the end caps - as per the designer's suggestion. Although Bjorn Thomasson suggests the use of squash balls, I've not seen them actually used - other than on his own boat. I think they look fine. I simply cut the ball open, filled it with thickened epoxy and pushed it on over the end of the boat. I should point out that I drove a screw into each end with a little of the head left out. This provided something extra for the epoxy fuse around. These two screws are the only pieces of metal in the entire boat!!

I like to wear my love of my home province on my sleeve. And when not on my sleeve, I wear it on the bow of my kayaks!! It all started several years ago when Cheryl gave me a Republic of Newfoundland sticker for my Baffin - which I proudly displayed on my bow. When I built my Point Bennett, she bought me another one and I put that on my bow. When I built my skin on frame,  Cheryl bought me another sticker but the stitch line on the fabric did not make placement easy, so the sticker languished on my computer desk. When I decided to build the Black Pearl, it was a given that the sticker would end up on the bow. And it did!!!

The boat is here in the living room with me now as I do the last bit of lashing on a paddle park. Tomorrow evening, hopefully, it'll hit the ocean!!

Thanks for dropping by,